Just short of the finish line, there was one anxious moment for “Coline”, as the miners called their TBM: 2.4 kilometers into the highly successful operation on an extremely demanding section of Lyon’s subsurface, the TBM was just a few meters from breakthrough when the monitoring systems flashed up some unexpected values. In the control cabin, the team from construction company Implenia France could see that the cutting wheel was not behaving as they expected. They immediately stopped the machine – just in time, according to Herrenknecht engineer Frédéric Battistoni who, along with colleague Matthias Schwärzel, had led the design and production of “Coline”. When the TBM team inspected the cutting wheel, they found that many of the disc cutters showed heavy wear, which could have resulted in major damage to the cutting wheel at any time. With the disc cutters replaced, “Coline” got back to work and successfully completed the last few meters of tunnel. The Variable Density TBM was finally back to daylight on May 15, 2021 after around 12 months, including several weeks’ delay caused by Covid-19.

Major metro project in the “city of lights”

With a population of half a million, Lyon is France’s third largest city after Paris and Marseille. This conurbation at the confluence of the Rhône and the Saône has grown considerably over recent years: together with the surrounding municipalities, it is now home to 2.3 million people, so expanding local mass transit systems is high on the agenda for local government. A key part of this project is the 2.4-kilometer extension of metro Line B to the south, reaching out from its current terminus at Gare d’Oullins to the Saint-Genis-Laval/Hôpitaux Sud hospital complex. However, on account of the geology along the tunnel alignment, the contracting joint venture between Implenia and Demathieu Bard commissioned by client SYTRAL would face some unprecedented challenges as they built this new stretch of line.

The new section of tunnel was to run through three different geological areas, two of them densely built up at surface level. Large numbers of old buildings in the Gare d’Oullins section were going to be particularly sensitive to any vibration, but the major challenge was the highly varied ground conditions. In some places, the new tunnel would have to be driven through stable granite (with a UCS of up to 189 MPa), but lengthy sections included a layer of loose gravel. And if that weren’t challenging enough, the planners also suspected the TBM would have to contend with individual boulders or ‘erratic blocks’ in the gravel stratum. This combination of geological features is extremely uncommon, and just 10 years ago, there was no tunnel boring machine capable of working in such ground without prior extensive above-ground support and stabilization work.

Tunnelling safely through heterogeneous geology is exactly what a Variable Density Tunnel Boring Machine is designed to do. Herrenknecht first introduced this technology in 2012, combining the advantages of EPB and Mixshield technology in a single machine type for driving through particularly complex and variable ground. As Alain Richely, Implenia’s Project Manager for the Lyon metro extension, recalls, “During the first phase of the tender, we carried out comparative research into the available types of tunnel boring machine to identify one that could tackle a challenge of this kind.” The answer was clear: the project called for a Variable Density TBM. As Richely points out, “this technology offers solutions for a wide range of challenges, and while that does make the machine very complex, it also makes it very flexible.” 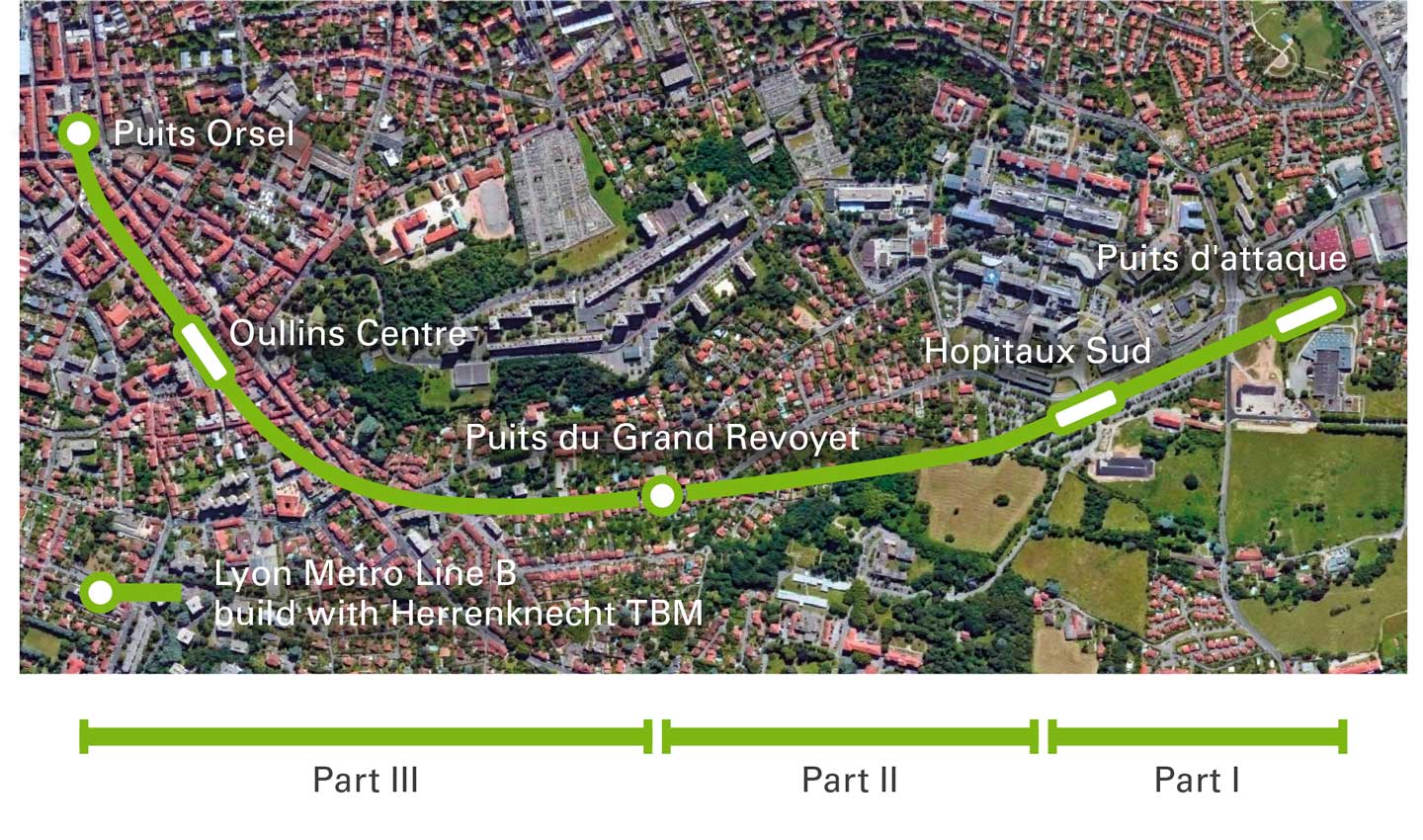 Since 2012, Herrenknecht has built some 25 Variable Density Tunnel Boring Machines and deployed them around the world. “Coline” is unique, though, as Co-Project Manager Matthias Schwärzel explains: “Loose and highly permeable ground makes for difficult tunnelling conditions, because the risk of subsidence is high, but the presence of erratic blocks increases the level of risk substantially.” He and fellow engineer Frédéric Battistoni had never previously encountered such an extreme combination of conditions as in Lyon. The key question they had to answer was whether the special technology of the Variable Density TBM would prove capable of mastering the combination of loose and highly permeable ground and boulders.

To prevent settlement and surface subsidence when tunnelling through loose ground, it is vital to maintain the stability of the tunnel face. The TBM used in Lyon operated in closed slurry mode, with the slurry suspension pumped into the excavation chamber and out again along with the excavated material. An automatically controlled air cushion regulated the support pressure precisely.

As Matthias Schwärzel explains, “In loose ground, there is a risk of uncontrolled leakage of the suspension, leading to a loss of pressure at the face.” To counter these risks, the team used a suspension specially designed for the project in conjunction with a precisely tailored flexible pressure management system. As Frédéric Battistoni reports, “Implenia spent a whole year developing the slurry suspension.” At the same time, Herrenknecht was already building the TBM – the parallel process presenting a further challenge for the two project managers, who were already working to a very tight schedule. This meant, for instance, that they repeatedly had to adapt the tanks and pumps in the slurry circuit to the suspensions that were ultimately used.

With toll gates in the project timeline that included workshop acceptance by the client at the Herrenknecht plant in Schwanau in July 2019 and the start of tunnelling just four months later, in November, scheduling was never going to be easy. But as Matthias Schwärzel recalls, “Ultimately, the suspension worked really well, not least because the Variable Density TBM provided for flexible regulation of the flow into the excavation chamber.” Implenia project manager Alain Richely also sings the praises of this TBM’s capabilities: “Not only can the Variable Density Tunnel Boring Machine handle suspensions of differing densities, it can also operate in entirely different slurry modes.” During tunnelling, “Coline” ran in high density slurry mode (HDSM) where the ground was highly permeable and in low density slurry mode (LDSM) in stable granite.

„WE REALIZED OVER THE COURSE OF THE PROJECT THAT THESE SYSTEMS WERE VERY GOOD AT MONITORING WEAR.

Getting to grips with wear

Anyone who has ever drilled into a piece of wood only to hit a hidden nail will have a good idea of what happens when a TBM encounters a boulder while boring through soft ground: there is a risk of serious damage to the drill head. As Frédéric Battistoni recalls, “As we prepared for the project, the likely level of wear resulting from the machine encountering these erratic blocks was a serious issue.” To enable the team to monitor the ground ahead of the cutting wheel more effectively, “Coline” was equipped with a battery of sensors. Four hydraulic structural wear detectors for the face and a disc cutter load monitoring (DCLM) system meant wear could be monitored, enabling the team to optimize the disc cutter maintenance schedule and predict potential damage of this kind. In the event, these systems provided the data that avoided damage to the enormous 9.75-meter cutting wheel in the final phase of the tunnelling work. As Battistoni recalls, “We realized over the course of the project that these systems were very good at monitoring wear. The problems we actually encountered arose elsewhere.”

As the two Herrenknecht project managers are well aware, theory is all well and good but it is no replacement for practical experience. In the wake of the Lyon project, Frédéric Battistoni and Matthias Schwärzel are drawing on a whole range of lessons learned to refine and enhance the Variable Density technology. One of their key realizations was that the 450-millimeter lines used to transport the mixture of suspension and spoil to the surface were particularly vulnerable to the conditions in the Rhône valley. Matthias Schwärzel paints a vivid picture: “The mixture of gravel and chips of rock up to 15 centimeters across flows along the lines at up to 4 meters per second. It’s like sandblasting, but with coarser material.” As he goes on to say, it is very rare for a tunnel boring machine to have to contend with heterogeneous conditions like those encountered in Lyon. Implenia, too, had seldom encountered anything like it, as its Technical Project Manager in Lyon Denis Vialle recalls: “The wear caused by the abrasive rock was very high, though that had nothing to do with the Variable Density technology.” The 6-to-8-meter sections of slurry line frequently had to be removed, turned and reinstalled to keep the wear on the walls evenly distributed. And the bends in the lines were particularly hard hit.

With the Lyon project, Herrenknecht was breaking new ground in more ways than one. As Frédéric Battistoni explains, “Four years ago, when the tender was issued and we brought our technology to the table, many experts argued that it couldn’t be done.” Now, though, Lyon is a blue-chip reference project that illustrates the potential of Variable Density technology: “The main thing we have learned from the project is that with a Variable Density TBM we can securely support such highly permeable ground − with minimal settlement.” Pointing out that the client’s specifications were met or exceeded in every respect, he adds: “Our collaboration produced some very positive outcomes.”

Implenia was no less impressed: as Denis Vialle explains, “The major geological challenge the project posed was the need to avoid settlement. The final outcome was very good indeed.” In fact, while the contract stipulated maximum settlement of 5 millimeters, the maximum measured settlement was just 3 millimeters.

Matthias Schwärzel too is enthusiastic: “The combination of EPB and slurry shield technologies really pushes the envelope,” he says, adding that Variable Density technology offers many further advantages, including accessibility and ease of maintenance, not to mention sustainability. The material excavated by the Variable Density TBM is separated at the surface, with the rock chips being removed from the suspension. Unlike with other kinds of TBM, this material can then be recycled: in Lyon, for example, it was used to line the bottom of the new tunnel. And as Project Manager Alain Richely notes, “This aspect was crucial at the tendering stage.” Denis Vialle agrees: “The technology is a very good – and sustainable – solution for anyone like us who wants to recycle as much of the excavated material as possible.”

Looking to the future

So if they had it all to do again, would Implenia still opt for a Variable Density Tunnel Boring Machine? “Yes, but with a simpler design,” says Alain Richely, adding that the team has learned a lot about how much of “Coline’s” potential they were actually able to use. Preparation time was at a premium, and having to design the machine and develop the suspension in parallel left them with no alternative in this case. Frédéric Battistoni agrees: “There are several things we’d do differently next time.” Nevertheless, for both parties the verdict on the Lyon project is extremely positive. Implenia Project Manager Alain Richely is convinced that the Variable Density TBM represents major progress for the construction sector. And Frédéric Battistoni and Matthias Schwärzel agree that under difficult conditions like those encountered in Lyon, as well as saving time and money, the technology has many more advantages to offer.