„Our machines operate in highly diverse geological and hydrogeological conditions“

says Matthias Schwärzel, who has led several tunnelling projects for Herrenknecht in his role as Division Manager, Project Management Traffic Tunnelling. “These conditions pose challenges for clients, planners and contractors that are never the same from one project to the next. Working closely with our customers, we tailor the chosen tunnelling method to each individual construction project so that the tunnelling operation is optimized for every terrain. This helps to drive technological progress because we are regularly forced to devise new solutions.”

Depending on the geology, the following machines are used for tunnelling in soft, unstable ground:

The new Variable Density technology combines techniques from these different machine types for use in particularly demanding geological conditions.

EPB Shields are the system of choice for soft, cohesive soils with high clay or silt content and low water permeability. The material excavated by the cutting wheel is used as the support medium at the tunnel face. The excavated material is removed by a screw conveyor, simultaneously regulating the support pressure. Targeted injection of soil conditioning agents such as water, bentonite or foam makes for even greater flexibility during tunnelling.

Mixshields on the other hand, are used for coarser, non-cohesive, aquiferous soils. The material is removed from the excavation chamber via a slurry circuit connected to a separation plant. The support pressure is precisely regulated by an automatically controlled air cushion. This allows the Mixshields to safely negotiate heterogeneous geologies and high water pressures of over 15 bars, even with very large excavation diameters.

for tunnelling in cohesive soil

for tunnelling in non-cohesive, heterogeneous soil with high groundwater pressure

for tunnelling in coarse and permeable ground, e.g., in medium to coarse gravel as well as highly fissured and karstified ground

„THIS IS A VERY SPECIALIZED NICHE“

From the Multi-mode TBM to the Variable Density TBM

In recent years, technological advances have opened up a wider range of applications than are possible with conventional TBM tunnelling shields. “Machines that use one specific technology can reach their technical and/or economic limits if the ground conditions in the tunnel alignment are highly variable,” says Schwärzel. “Examples include geological layers with very different compositions and properties, sections where the geology alternates between highly cohesive, sticky soil and coarse soil, or even where it changes from unstable to stable rock.”

It is for alignments like this, which are among the most challenging in tunnel construction, that Herrenknecht engineers designed Multi-mode Tunnel Boring Machines. These machines combine the support and excavation technologies of Open-face Shields, EPB Shields and Mixshields, and can operate in various different modes. They can be converted from one mode to another in the tunnel − for instance from EPB Shield mode to Mixshield mode − as required by the geological conditions. This means that a single Multi-mode TBM can, for example, be used for two different sections of tunnel that would previously have required two different types of machine.

Herrenknecht’s Variable Density TBM constitutes an important advance in the evolution of mechanized tunnelling technology. Its design combines the advantages of the EPB Shield and Mixshield modes in a single machine. A fully configured Variable Density TBM can flexibly switch between four different tunnelling modes without needing any major modifications.

This globally unique technology has a wide range of applications and has also proven itself in exceptionally complex conditions where tunnelling was previously not possible. According to Matthias Schwärzel, “This is a very specialized niche with huge potential, as demonstrated by the strong demand for these machines.” Variable Density TBMs have already been successfully deployed in some 15 projects over the past ten years. And further milestones are already on the horizon.

Overview of the working principle of a Variable Density TBM

The slurry circuit begins in the slurryfier box, a kind of outsized cistern directly connected to the screw conveyor. Here, the addition of either a normal suspension (usually bentonite) or a high-density suspension gives the excavated material the optimal consistency for the slurry circuit. The slurry is then pumped to a connected separation plant. Here the solid particles are removed before the cleaned slurry suspension is returned to the excavation chamber where it enables safe tunnelling by supporting the tunnel face.

“This process makes it possible to safely and efficiently excavate particularly coarse and permeable soil structures, for instance in the particle size distribution range of medium and coarse gravel and in highly fissured or karstified ground,” explains Schwärzel. This includes highly permeable gravel layers such as those encountered in the Lyon metro project, a technological milestone in tunnel construction. Another example is when karst structures or cavities are found along the tunnel alignment, perhaps even with just a small overburden, meaning that there is only a short distance between them and the surface. “In these cases, if the support fluid doesn’t have the right density for the prevailing underground conditions, it could easily leak during tunnelling and, in the worst-case scenario, breach the surface at high pressure, causing extensive damage. The slurry circuit mechanisms prevent this from happening.”

From Kuala Lumpur to Perth

The construction of the new Klang Valley Mass Rapid Transit MRT metro in Kuala Lumpur, Malaysia, is a game changer for urban development. This major project is delivering more efficient, sustainable mass transit for over eight million people living in the metropolitan region. The first phase was the 51-kilometer “Blue Line” from Sungai Buloh to Kajang. Around 20 kilometers of the line run through karstified limestone with large underground inclusions. To enable safe tunnelling in these challenging underground conditions, two Herrenknecht EPB Shields and six Herrenknecht Variable Density TBMs were used for a total of almost 11.4 kilometers of tunnel between 2013 and 2015. This was the first time Variable Density TBMs had been used anywhere in the world. The machines proved themselves to be up to the task over a two-year construction period, paving the way for current projects involving tunnelling in extremely challenging unconsolidated rock.

In 2016, a Variable Density TBM was used in the Shatin to Central Link (SCL) extension of Hong Kong’s metro network. Designed to fill strategic gaps across the Hong Kong metro, at the time, this was one of the most important and challenging urban tunnel construction projects ever undertaken. Tunnelling near the coastline proved especially tricky due to the mixed geologies with overburdens of no more than around 6 meters in some places. However, with the help of the Variable Density TBM, the tunnelling for this section was accomplished with no adverse impacts. Construction of the line was successfully completed in November 2017.

“Grace” finally made her breakthrough in February 2020. “Grace” and “Sandy” are two Variable Density TBMs built at Herrenknecht’s Guangzhou site in China that bored through the heterogeneous soils below Perth, Australia, between Forrestfield and Bayswater. Built by the Salini Impregilo – NRW joint venture, the two tunnels form the Forrestfield-Airport Link, which connects Perth’s eastern suburbs and international airport with the city center. With Perth’s population forecast to rise from two million to 3.2 million by 2030, the new metro link will help to sustainably address the city’s growing infrastructure requirements. It cuts the journey time to the city center to just 20 minutes, compared to 45 minutes by car. 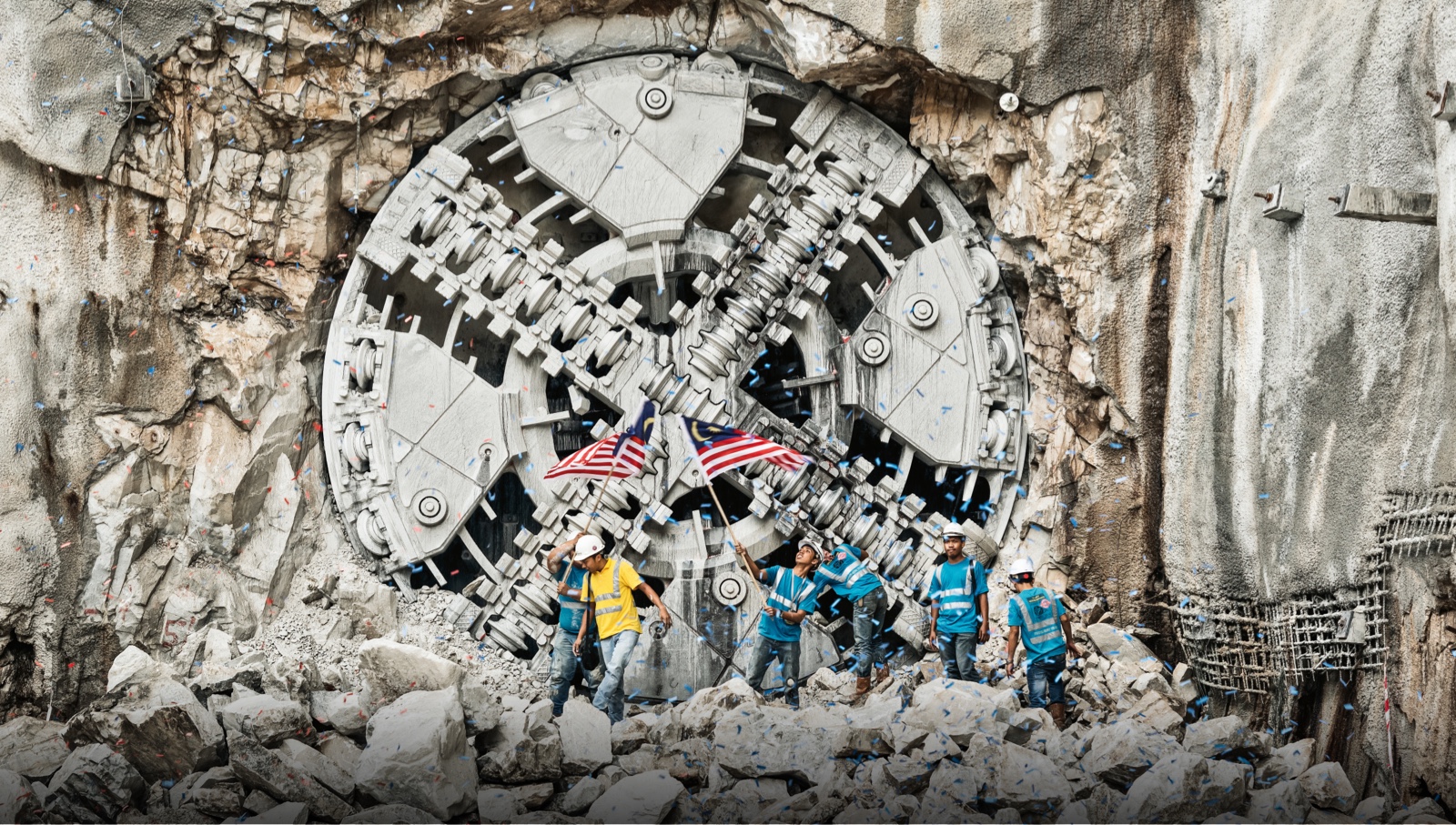 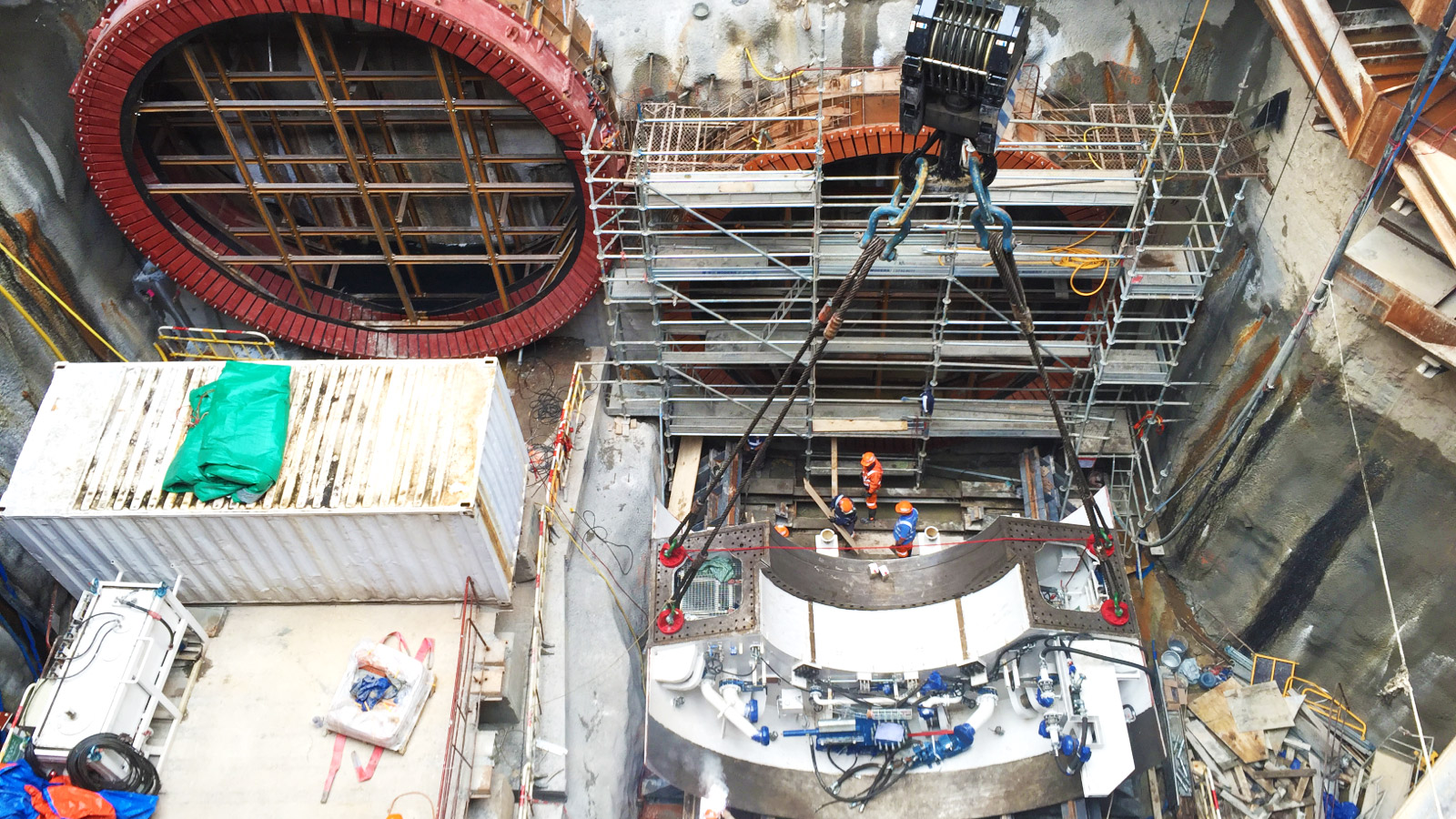 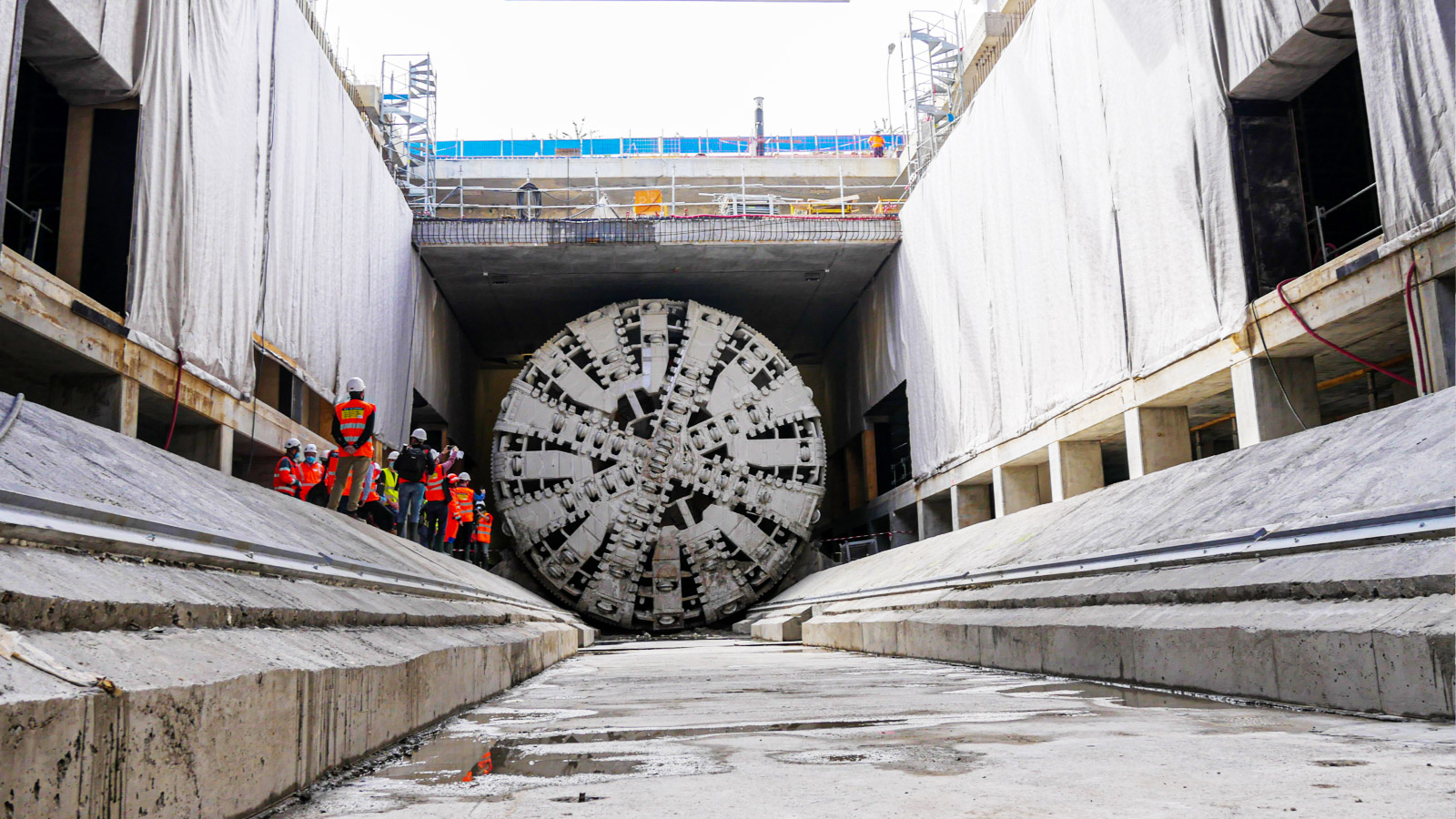 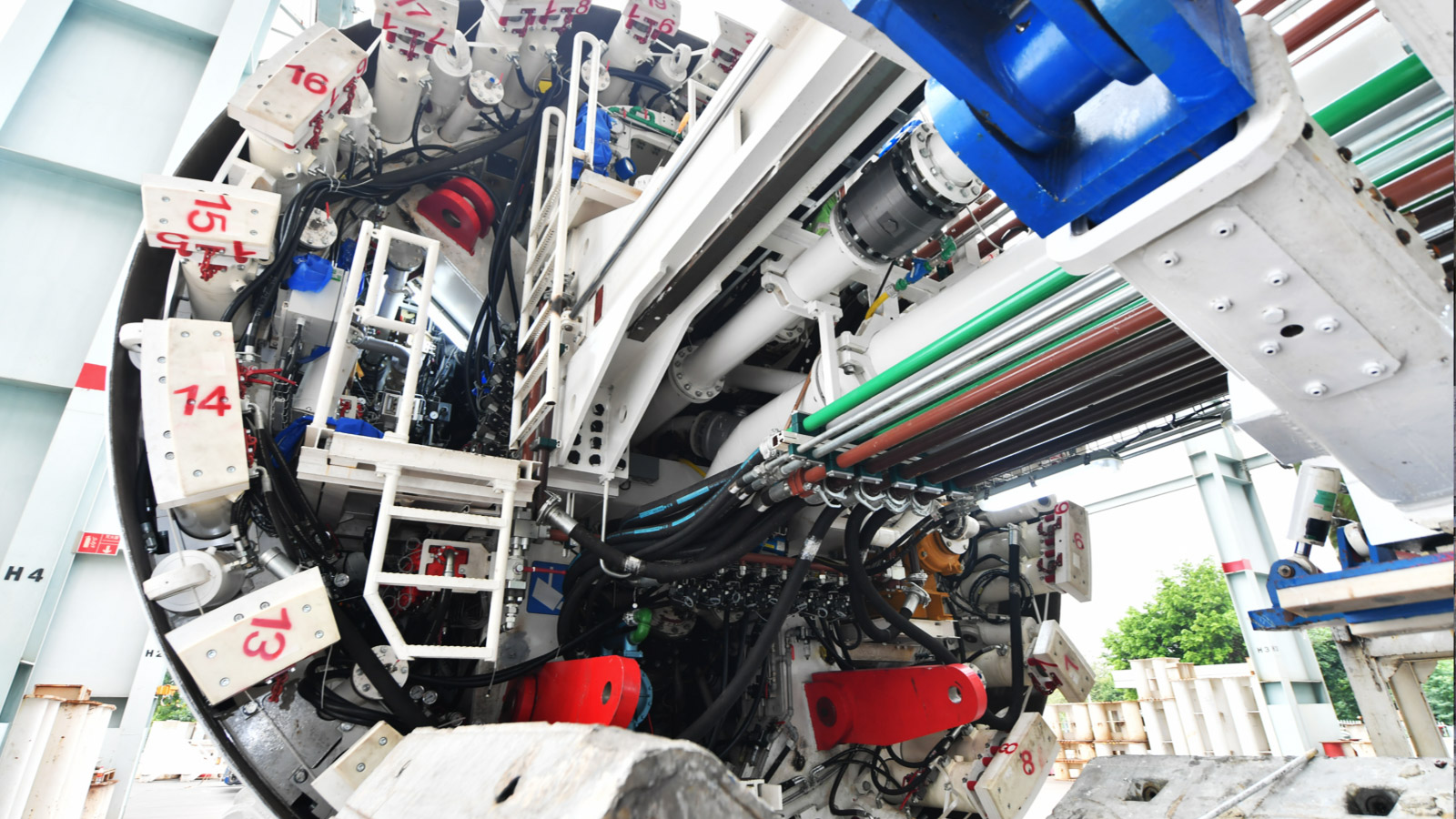